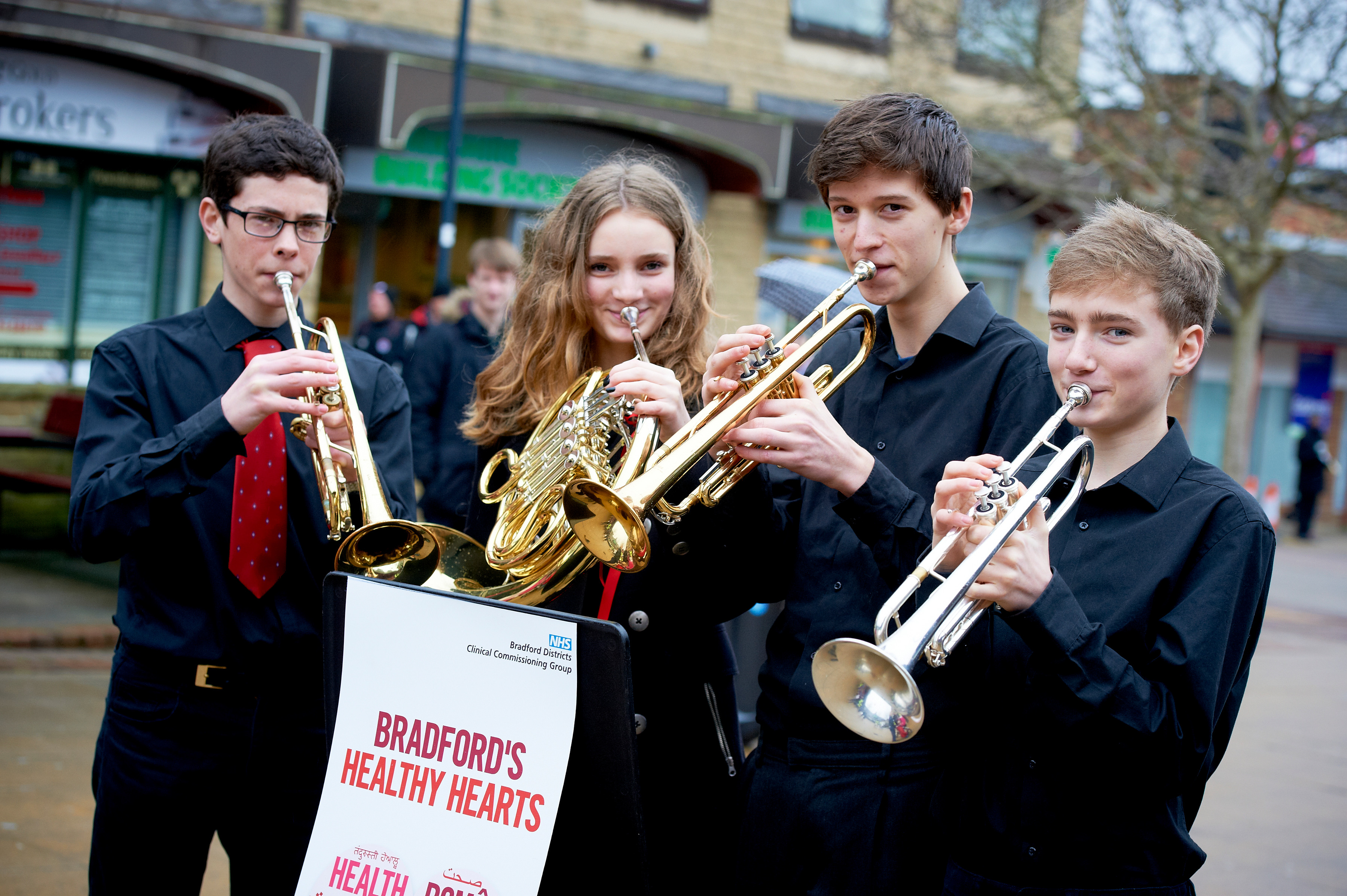 An impromptu and heart-warming performance will sing out the up-beat message of a new Bradford health campaign.

Today, Saturday, February 14 – Valentine’s Day – onlookers in Shipley will be entertained by a group of talented, young musicians who will suddenly gather together to perform in public, in the street.

The ‘flash mob’ will be made up of around 40 musicians from Bradford Youth Orchestra, part of Bradford Council’s Music and Arts Service, and take place in Well Croft at 12 noon.

It will begin with a single cellist, emerging from one of four points before building to a full orchestra. The musicians, aged from nine to 19, will assemble themselves into the shape of a giant heart, as they play two heart-themed pieces – the theme from the popular ITV series, ‘Heartbeat’ and the Bill Ray Cyrus hit, ‘Achy Breaky Heart.’ They will be conducted by Morgan Griffiths.

The ‘flash mob’ is being performed to launch the second stage of the Bradford’s Healthy Hearts campaign, the brainchild of NHS Bradford Districts Clinical Commissioning Group (CCG.)

Bradford’s Healthy Hearts campaign is aimed at reducing the risk of stroke and heart attack in people who are in risk groups.

It is being developed over three years targeting three main areas:

As part of the first phase of the campaign’s development – improving the care of patients with vascular disease – GPs are now busy targeting patients known to be at risk. Those who are currently being prescribed statins are having their medication changed to Atorvastatin, a more effective statin which reduces the risk of stroke or heart attack.

February 14 marks the start of the next part of the campaign which is to inform people more generally about heart disease and stroke.

Dr Youssef Beaini, Clinical Lead Cardiovascular Disease for NHS Bradford Districts CCG said: “We are dedicated to improving the care of patients with heart disease in the CCG’s area and our aim is to raise awareness of heart health. As a result, patients can expect a more detailed assessment by their GPs and their treatment could well be adjusted.

“Our key messages are aimed at helping people to live healthier and longer lives, and this can be achieved through knowing your blood pressure, knowing your blood sugar and lowering your cholesterol, as well understanding the powerful benefits of stopping smoking, healthy diets and physical exercise.

“Today’s flash mob is a fun way of promoting our campaign and we’re all looking forward to watching and hearing the orchestra. We must remember, however, that behind it is a serious message, and we hope that the performance will raise awareness of heart health in general.”

Michael Jameson, Bradford Council’s Strategic Director for Children’s Services said: “We are delighted to be doing our bit to support this very worthy campaign. The Youth Orchestra musicians love performing in public. This will be their first flash mob and they were all very excited and keen to do it when the idea was suggested.

“We hope lots of people will gather round to watch and listen to the performance. It promises to be really entertaining!”

Key messages about the campaign are currently playing on the big screen in Bradford city square.

Healthy Hearts makes it to sh...